As any resident who lives in Harare knows, the city has been struggling to efficiently collect revenue in the COVID world. Bills are not being sent out to residents on time with some coming as late as five months later if they ever arrive at all. How are people supposed to pay when they don’t even know what they owe?

This has resulted in people being forced to throng council offices as they seek to enquire what they owe. Such large gatherings undermine the country’s COVID fighting strategy. Many more simply don’t pay and use the fact that they didn’t get a bill as an excuse. This is depriving an already cash strapped Council of essential revenue and further hurts service delivery.

How it’s going to work

Before the city can start to send bills electronically they will need to build a database that has the resident’s e-billing details. It appears that they intend to do that from scratch. They have sent out a notice inviting residents to submit their details which they have dubbed e-details. In a bid to speed up the process they have assigned Revenue Officers to each urban district as shown below. 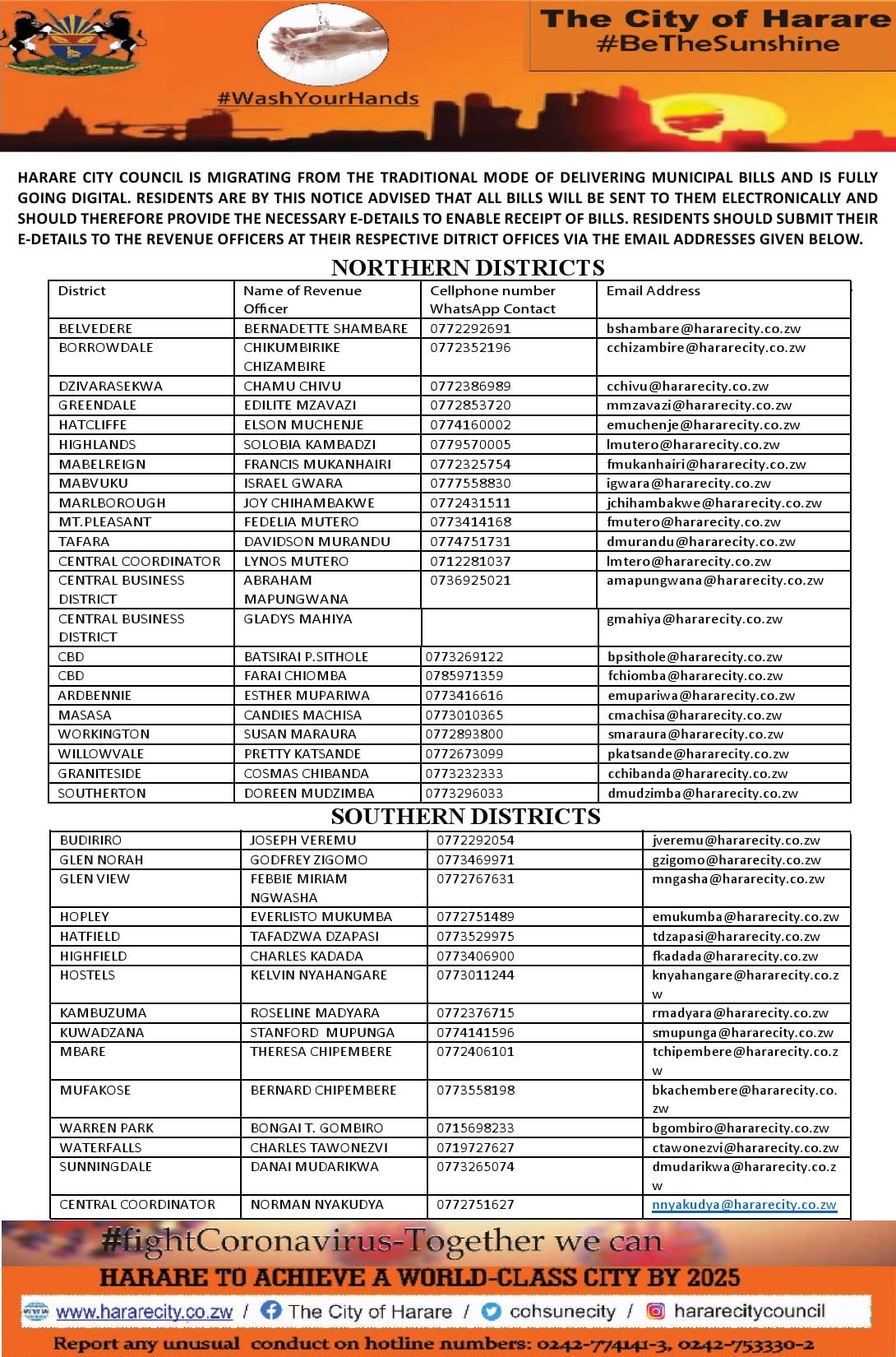 Now to add to the confusion residents are being asked to submit their details via email. This is despite the fact that the WhatsApp details of each officer are helpfully supplied on the notice. The inescapable assumption here is that bills would be sent via email. That would be a mistake.

Time and time again data published by POTRAZ has shown how Zimbabweans love WhatsApp more than any other platform. There are people for whom WhatsApp constitutes their entire internet experience. It’s hard to imagine a household that doesn’t have at least one phone on WhatsApp but it’s almost certain that the bulk of residents do not have an email address. At least they don’t regularly use email. At the very least the City can do a survey and find out how people would prefer to receive their bills.

No doubt WhatsApp would be the overwhelming choice. However, that would probably require more development work on the City’s side but it would be more than worth it as it would result in a more inclusive billing system. That will probably enhance the city’s revenue collection efforts and so whatever extra effort is required to make this work will more than pay for itself.

Thank you! You are now subscribed to our newsletter.

Also In Our Blog
Borehole Companies Swindle Customers
Does your House Suit an Expat?
Zimbabweans Leveraging the Power of Social Media to Build Houses
City of Harare Is Going Fully Digital
Bogus Agents Make a Killing During Lockdown
You Should Stay Away from Asbestos

This site is protected by copyright and trademark laws under Zimbabwe and International Law. Propertybook.co.zw 2021 ©

Sorry your session has expired due to inactivity, you will be redirected to the login page shortly.

Please enter at least one location or web reference to search