Zimbabweans Leveraging the Power of Social Media to Build Houses

Social media is often portrayed in a negative light. Experts and authorities like to call it the home of fake news and lies but the truth is much more nuanced than this. When used right, social media can be a very powerful tool that can make your life easier. This can be true for many aspects of your life including if you are wanting to build a house.

Most people who embark on the house building journey are often doing it for the first time with few doing it for the second time. This means everything is new, and in times past contractors, middlemen and builders would often exploit this information gap and use it to extract more money out of homebuilders.

Thanks to social media platforms that is no longer as easy as it used to be. There is an especially popular group for those building houses in Zimbabwe called Lets Build Our Homes ZW on Facebook. The group has a massive following of over 200 000 members most of whom are active members.

The biggest problem in groups such as this is usually spam but the admins of this group have ruthlessly stamped it out with most spammers only ever getting to post once before they are exorcised to the nether regions of the internet. This makes the engagements on most posts refreshing and informative.

Remember what I said about social media being a weapon against contractors and exploitation by middlemen and shoddy construction companies? Well, groups like this act as a bulwark. In groups like this people share their genuine experiences with various companies and contractors. Horrifying and heartbreaking stories about shoddy work are used to thwart these people from exploiting other would-be victims. 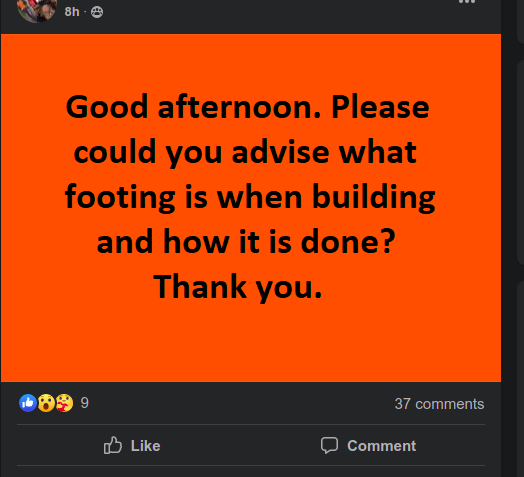 As already said, most of the time when you are building you are doing it for the first time. This means you are probably not familiar with building lingo. So what is footing and is it even a genuine term or is your builder out to grab more of your money? Here you get answers from other members as well as builders and those in the industry.

That’s right. Keenly aware of the value of the group as a potential source of serious clients various members of the construction industry often join these groups. They will helpfully share their knowledge and sometimes offer competing bids that will help you with decision making as a builder.

The competing bids part is especially useful. Sometimes you receive a quotation from a building company and don’t know whether you have been overcharged or undercharged. Sharing your quotation or requirements list with others will actually allow you to quickly source bids. Publicly and also expose potential issues with your requirements list. Sometimes you even get advice from members about things such as which roofing material is best to use grass, zinc-coated sheets or asbestos. Now there is a debate that is still raging on.

Of course, such groups are not without problems and sometimes when you post a question seeking advice you get so many competing viewpoints you might actually end up being even more confused. If you are not careful you can even fall prey to the few scammers that roam in such groups too. But a lot of Zimbabweans who are building or want to build their homes are finding value in such groups. Maybe you will too.

Thank you! You are now subscribed to our newsletter.

Also In Our Blog
Borehole Companies Swindle Customers
Does your House Suit an Expat?
Zimbabweans Leveraging the Power of Social Media to Build Houses
City of Harare Is Going Fully Digital
Bogus Agents Make a Killing During Lockdown
You Should Stay Away from Asbestos

This site is protected by copyright and trademark laws under Zimbabwe and International Law. Propertybook.co.zw 2021 ©

Sorry your session has expired due to inactivity, you will be redirected to the login page shortly.

Please enter at least one location or web reference to search